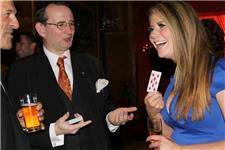 Manchester Magician Carl Royle Has been performing magic since childhood.He has become one of the UK’s leading magical performers with a light-hearted fun approach to magic that leaves all his audiences stunned and amazed.
Although based in Manchester Carl has traveled the world as a professional magician performing at Corporate Events, Weddings, Trade Shows and private parties.
Carl is well known for his expert close up magic skills and also his award-winning after dinner cabaret show. Both of these are presented with a sense of fun as he puts his audience at ease so they can be entertained and amazed with stunning magical effects.
magic circle Amongst the many achievements he has in magic Carl is especially proud to have been chosen as President of one of the UK’s largest magical societies, The Manchester Circle of Magicians and also to be a member of the world famous Magic Circle based in London.
You and your guests are guaranteed magical satisfaction if you hire Manchester Magician Carl Royle for your event. He has built his reputation from repeat bookings and the ability to always deliver astounding magical performances. Whether it be a small private dining function to a large theatre audience you can be assured that using his Manchester Magician Magical approach your guests will be thrilled.

There are no reviews for Manchester Magician Carl Royle. Write a review now.